The Wriders’ Club (TWC) was founded by EUROBIKE and pressedienst-fahrrad in the summer of 2016. You can find out here what TWC aspires to be and what functions it performs. 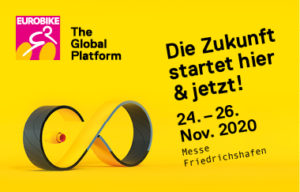 Messe Friedrichshafen hosts EUROBIKE, the world’s leading trade fair in matters relating to cycling, and is a reliable partner to the bicycle industry. This work is defined by a modern understanding of the trade fair/marketplace. The EUROBIKE team is continuously identifying topics and issues from the industry that are addressed under the umbrella of EUROBIKE. Good examples of this are the Travel Talk, the Demo Day, the Media Days, Design Award and the Academy. The Internet, its protagonists and especially the blogosphere are clearly a part of all this and are intended to maintain a perfect connection to Eurobike within TWC.

All posts with the hashtags #EurobikeShow are collected and displayed on giant screens during the trade show as well as online on the website under the year – everyone is welcome to participate.
The most important EUROBIKE links: Instagram, Facebook, Twitter, YouTube, LinkedIN, Accreditation, Eurobike, DIGITAL DAYS, Press releases

Pressedienst-fahrrad (pd-f) has set itself the task of generating more attention for quality bicycles and their use through media work. Following this aspiration, it deals intensively with the blogosphere and experiences, on a daily basis, the energy generated by the topic of cycling and how much digital energy the blogosphere produces, yet also how much of this energy simply fizzles out due to the lack of synchronization. Liaising between the bicycle world and the media cosmos also in relation to bloggers is something that pd-f regards as one of its core functions.