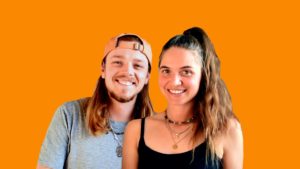 Selbstbeschreibung:  The Longest Road is an upcoming 14 episode YouTube series following the journey of two adventure filmmakers attempting to cycle 2000km from John o’Groats to Lands End on £100 bicycles with no previous cycling experience. Forced to make a break from around the world travel, ‘The Longest Road’ follows adventure filmmakers Lavi and Ollie as they take on a challenge here at home attempting to cycle from the northern tip of Scotland at John o’Groats to the southern tip of England at Lands End, dubbed “The longest possible road in Britain” stretching 2000km, all on £100 bicycles with no previous cycling experience.“ This series documents their 37 day adventure as they battle the ups and downs of the trail, cycle and wild camp through the stunning landscape of the Scottish highlands, cross over tough mountain passes in the Lake District and discover the peaceful canal systems of rural England, fighting not only their inexperience, but also their second hand failing bicycles.